Freemasonry for Women was invited to participate in the Uni Scheme Conference held at Chester on 16th November. Scheme Chair Maxine Priestley addressed the conference on the subject of our involvement to date with the Uni Scheme. The Province of Chester are to be congratulated on their excellent organisation of this conference which was held in the splendid surroundings of the Christleton Centre, just outside Chester. In fact there were so many interesting seminars that it was difficult to choose which to attend. We were pleased to meet representatives from the Order of Women Freemasons, who were also present at the Conference. 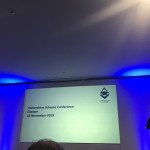 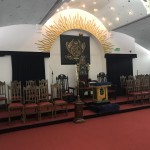 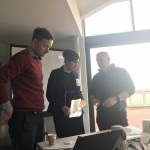 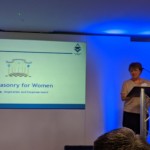 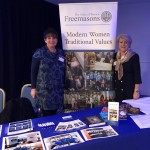 The OWF were also present

The Connaught Club is aimed at members of Metropolitan Grand Lodge who are under 35.  On 26th April, they held an Open Night at the UGLE headquarters in Great Queen Street in London and invited HFAF Freemasonry for Women along. Several members together with Grand Master Christine Chapman attended and Grand Master Christine addressed the gathering. 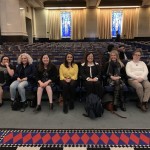 The HFAF members arrived early to get a good seat 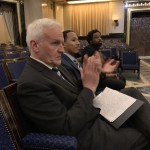 On 6th April the UGLE University Lodge Apollo No. 357 celebrated their bicentenary at a very special meeting held in the Sheldonian Theatre of Oxford University in the presence of the UGLE Grand Master, H.R.H. Duke of Kent.   Our Grand Master Christine Chapman and University Scheme Chair Maxine Priestley were invited to attend this very special event and the after meeting celebrations, which included a Champagne reception at the Ashmolean and a splendid banquet at Keble. 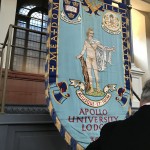 A unique meeting at the Sheldonian 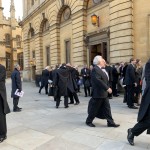 Everybody making their way to the Ashmolean 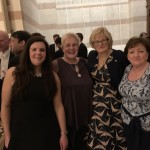 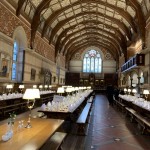 Sunday 2nd September, saw a very unique occasion when members of various Masonic Orders were invited by Grand Master Christine Chapman to attend an especial meeting of the Grand Lodge of HFAF to listen to the famous Masonic author and scientist, Dr Robert Lomas. UGLE gave permission for us to hold this event at Great Queen Street in London in the famous No. 10 Temple, also known as the Indian Temple. A gathering of  men and women Freemasons were entertained by Dr Lomas to hear about his journey in Freemasonry and his thoughts on various Masonic topics. The event was followed by a buffet and drinks reception in the vestibule outside the Grand Temple where people were able to chat together.

Dr Lomas had much earlier in the year offered to give a talk to HFAF and the Grand Master Christine Chapman had taken the opportunity to open it up to other Orders. 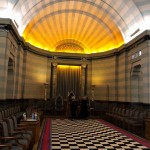 The wonderful Temple No. 10 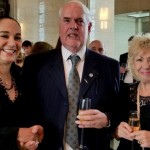 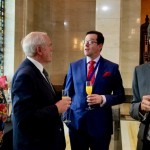 HFAF Freemasonry for Women was present at the Middlesex Family Fun Day on 15th July and the Herts Family Fun Day on 22nd July both held  at the Royal Masonic Girls School in Rickmansworth. As well as raising the profile of Women’s Freemasonry we also raised funds by running very successful Tombola stalls. 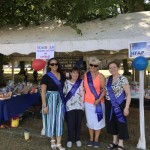 The HFAF Team at Middlesex 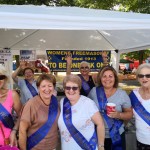 The HFAF team at Herts 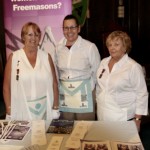 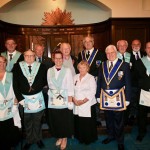 W, Bro. Hazel manned the display at Tunbridge Wells Open Day on behalf of Sussex 17 and Rising Star 38. She received lots of enquiries as a result of her eye-catching display. 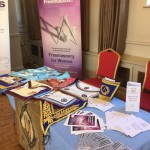 On Saturday 22nd July Herts and Middx Provinces of UGLE joined together to stage a Family Fun Day in the grounds of the Royal Masonic School for Girls in Rickmansworth. Despite the atrocious weather there was a good turnout and the event was well supported. We provided our usual Tombola Stall and well done to the HFAF Team who battled on despite several drenchings. 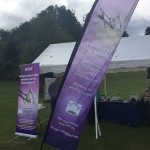 No-one could miss our stall! 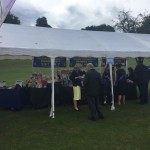 Members of Cotswold Lodge  51 were pleased to be able to participate with their fellow Freemasons from UGLE in the Carnival Parade through the beautiful town of Witney on Saturday 8th July. Cotswold 51 meets at the Masonic Temple in Witney. 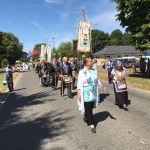 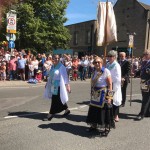 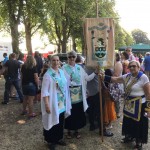 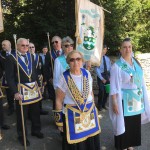 On Thursday 22nd June Grand Master Christine Chapman, at the invitation of the WM V.W. Bro. Ian Currans, Met GL AGM addressed the members of Jubilee Masters Lodge and their guests on the subject of Women’s Freemasonry. The Grand Master accompanied by her Grand Lodge Officers was escorted into the Grand Temple where she was received by the WM. The invitation had been issued many months ago and was arranged as the lodge’s Tercentenary event. Due to the size of the audience which had also been augmented by guests and members of HFAF, the event was moved from Temple 10 to the Grand Temple.

Her talk which was entitled Women in Blue was enthusiastically received and at the end she received a standing ovation. She answered several questions on the subject to the satisfaction of all present! Her talk is now available on Met GL Porchway website. 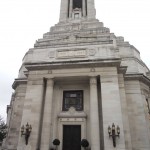 The iconic view of Freemasons’ Hall in London 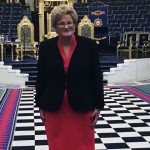 It’s a long walk to the East! 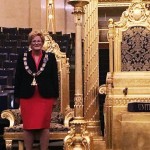 After the meeting the guests took the short walk along Great Queen Street to The Grand Connaught Rooms for a splendid banquet.

Freemasonry for Women Bharati Lodge No. 56 held its 3rd Anniversary meeting at Secunderabad when four brethren were passed to the Second or Fellowcraft Degree. The day before the brethren had presented benches to the local primary school and in…

The annual PGLOA (Past Grand Lodge Officers Association) Xmas Lunch took place at HQ on December 2nd. A delicious lunch and musical entertainment were provided and the merriment concluded with a visit from Father Christmas.

Copyright © 2014 - 2020 The Honourable Fraternity of Ancient Freemasons. All Rights Reserved.