When Sumaira joined Surrey 45 in February she was joined at the Festive Board by her extremely proud mother Shaista and father Altaf, a member of Finsbury Park Lodge 1288 who had flown in from Saudi Arabia, where he currently works to share the occasion with her. Sumaira first met members of Surrey Lodge 45 at the Surrey University Freshers’ Fair.

Beverley - a Master in the lodge and in the water!

Beverley the Worshipful Master of Unity Lodge 58 in Letchworth was given a day pass to miss the 3rd meeting of the new lodge in order to compete in the 1500m of the British Masters Swimming Championships which were being held in Swansea and simultaneously compete in the Welsh Championships. This is her story ….

I came into Freemasonry, reading of its morality and brotherly love.

Life’s circumstance had knocked my confidence and Vitiligo, a trauma-based skin condition had manifested over my entire body . It took courage to journey through to the Masters Chair and each step forward was a constant challenge.

My work hours however were getting longer and meetings harder to get to. So when I was given an opportunity to be involved with forming a new weekend lodge , it felt like the perfect solution -therefore Unity evolved.

I decided , with my girls’ encouragement ,to train for a charity swim raising funds for the Fraternity and Independent Age. As a child, I was a competitive swimmer but facing the swim suit after more than 30 years and now covered with giraffe patch skin, was terrifying. After six months of four times a week training, I proudly completed the 10k open water challenge , raising £2400.

Having trained that hard, the next step into competitive swimming again, you would think would be simple but I was going into the unknown. A woman in her fifties facing the pool, body aches and long hours of training but unless you try to do something beyond what you have already mastered, you will never grow.

I was accepted into the Barnet Copthall Swim team, completing my first race in November ‘19. Having entered a few competitions, I had a call to say that I had qualified to swim in the first leg of the British Masters Championships in Swansea.

I am so grateful for the friends I have made in our fraternity who have showed kindness and constant support throughout this experience. I hope I’ll prove that courage doesn’t mean that you don’t get afraid -just that you don’t let fear stop you!”

The result of all her hard work was a 3rd place in the 1500m event of the British Championships and into further events at the end of April and a double win in the Welsh Championships in the 800m freestyle and the 200m medley.

On February 12th W Bro Carole returned to work as WM of Grace Bilantz 34 when she was beautifully installed by the amazing Helen. We are sure that Helen wont mind us mentioning that she is 85 years young and came to the rescue when the outgoing WM was unable to attend the meeting due to work pressures. Grace Bilantz 34 is one of our London lodges meeting at our headquarters, 402 Finchley Road, London NW2 2HR.

Working together in Unity

Sunday February 2nd saw our newest Lodge, Unity 58 perform its first ceremony. Bro Rose was Raised to the degree of a Master Mason by WM Beverley. Unity meets in the uniquely special surroundings of The Cloisters at Letchworth. Unity was consecrated in October 2019 as a University Lodge to work together with the Province of Herts in our Uni Schemes.

Saturday January 25th was the first meeting of the masonic year for the Costa Blanca Lodge of Tranquility 52 under the leadership of Worshipful Master Nestar who passed Bro Jan and Bro Patsy to the degree of Fellowcraft. This lodge was consecrated in 2005.

Linda holds the fort for another year

Constance Leaver Lodge No. 39 held its annual Installation meeting on Thursday 23rd January 2020. Worshipful Master Linda was proclaimed as WM for a second year and then proceeded to invest her Officers. W Bro Yvonne remains at her side as Immediate Past Master.

The Festive Board was held in a very convivial atmosphere and enjoyed by all those present. 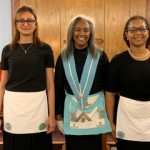 WM and 2 Fellowcraft at Ambassadors 13

Progress continues at Uxbridge Masonic Centre as two Initiates, Bro Harsheel  and Bro Amonia took their second regular step in Freemasonry and were Passed to Fellowcraft by WM  Cecilia . It is hoped that the work undertaken at Uxbridge will lead to the consecration of a new University lodge,  Bro Harsheel also hopes to establish a lodge in Kenya in the future.