October 8th – 12th saw us travelling North for our annual visit to our Provincial Lodges. The trip encompassed a Craft Meeting, followed by a Royal Arch Installation and finished with the customary Royal Ark Mariners Installation meeting. The week was tinged with sadness as the late Provincial Grand Master Brenda Cook was remembered at every meeting with much love and affection.

On Monday 5th June at Morecambe RW Bro. Brenda Cook was invested as the new Provincial Grand Master by RW Bro Pat Rothwell the outgoing PrGM. RW Bro Cook had previously received her Letters of Patent from the Grand Master at the December Grand Lodge Quarterly Communications in London and been Obligated at the May Quarterly Communications. RW Bro Cook was was pleased to appoint VW Bro. Angela Seed as her Deputy. 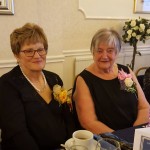 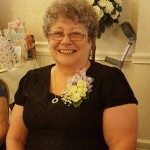 On Friday 20th January, the Grand Master Christine Chapman accompanied by the Grand Secretary Maxine Priestley travelled to Kendal, the home of the famous mint,  at the invitation of Eversley Lodge and Kendal Castle Chapter. The evening which had been organised by artisan baker and freemason Simon Thomas and Maxine was supported by both the local masonic community and also by members of the HFAF from our lodges in  Morecambe, Blackpool, Preston and Carlisle. The talk outlined the history of Women’s Freemasonry and the current development of HFAF. 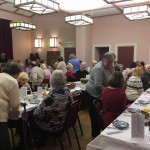 The audience for the Grand Master’s talk

Freemasonry for Women Bharati Lodge No. 56 held its 3rd Anniversary meeting at Secunderabad when four brethren were passed to the Second or Fellowcraft Degree. The day before the brethren had presented benches to the local primary school and in…

The annual PGLOA (Past Grand Lodge Officers Association) Xmas Lunch took place at HQ on December 2nd. A delicious lunch and musical entertainment were provided and the merriment concluded with a visit from Father Christmas.

Copyright © 2014 - 2020 The Honourable Fraternity of Ancient Freemasons. All Rights Reserved.