Sheila Norden was Initiated into Doric Lodge No. 11 in 1955 having been proposed by her mother Lily Greenfield. She became Worshipful Master in 1966. She developed a love of the ritual and was always able to prompt any ceremony.

She eventually became Grand DC and in 1986 was authorised to hold Lodges of Instruction at her Spanish home for a new lodge for Gibraltar and became its first Master in 1989. She maintained a close connection with Gibraltar until failing health prevented her from attending. 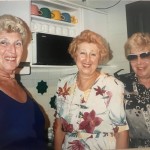 She was appointed Assistant Grand Master in 2002 by Grand Master Suzanne Berman and succeeded her in 2006. She was featured in an article for Freemasonry Today in 2007.

Whilst Grand Master she consecrated a new Chapter for the Royal Arch Degree in Essex in 2009. She gave permission for the Ad Thesaurum No. 12 Lodge of Research to be revived and when several Romanian women approached us, she gave permission for a lodge to be consecrated and appointed Christine Chapman to re-open Ambassadors Lodge No. 13 to admit all the Romanian women.

Despite increasingly bad health she still managed to attend Board meetings and Grand Lodge meetings and of course meetings of her mother lodge Doric 11. 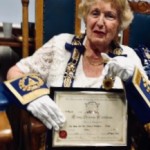