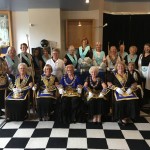 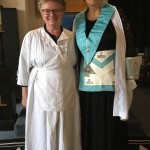 Dalecote House in Coventry is the current home for the Ambassadors Coventry project. A chain of events which started with a search for two Wardens columns led to a skilled craftsman and Freemason,  David Joyce based in Coventry. He told HFAF Deputy Grand Master Irene Stewart that he was on the Board of Management of a Masonic Centre called Dalecote House in Coventry. He told her that they would love to have a women’s lodge meeting there. She duly reported this conversation to Grand Master Christine Chapman who  immediately seized the opportunity to take Ambassadors No. 13 to Coventry to try and re-open Centrum Lodge No. 46. A White Table meeting was arranged at Dalecote House and Grand Master Christine Chapman travelled to Coventry to talk about the HFAF and Freemasonry for Women, which resulted in a number of enquiries. The first meeting of our travelling Ambassadors Lodge was held at Dalecote House in 2016 when two former members of Centrum No. 46 were re-admitted into the Fraternity and two women were Initiated into Ambassadors Lodge.  Subsequent meetings have seen more admissions and it is hoped to re-open Centrum No. 46 in 2018 under the leadership of W. Bro. Leonie Newell.